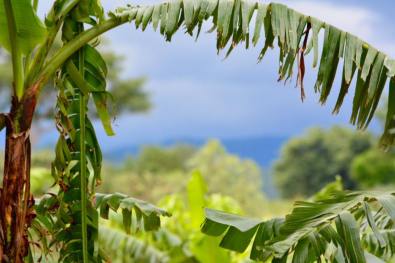 So far, I’ve shared about the time before my mission trip and my traveling adventures.  Before going into what I experienced on site, I wanted to share what I saw on the way.  I saw Uganda – and it pierced my heart.

When we flew into Entebe, George and Geraldine Smith met us (they are IMB missionaries and coordinated our trip – they are formerly from Jackson

County, MS).  The Smiths hold a special place in the hearts of many of our FBC folks – for good reason.  They have dedicated their lives to sharing the hope of Jesus Christ – now throughout Uganda.  (And George makes a mean cup of French-pressed coffee!)

It was late when we arrived, so we bedded down in a little hotel.  (By the way – I found it fascinating to find a Gideon Bible in my room.)  Little did we know that the workers also lived there, and they had to get up at 3:00 a.m. to get our breakfast ready.  Jet lag – middle of the night wake-up – early exit to travel North – I was not happy.  But my spirits were lifted when they had mango juice at breakfast – and I do love mango!!  (I won’t mention what the avocado juice tasted like on our trip back South.)

We left early and got to see the little city waking up.  And BOY do they wake up!  People were everywhere – working – buying – selling – it’s a country that seems to be filled with entrepreneurs.  One person would walk along the road selling water bottles; another selling food; another selling car floor mats; another selling children’s books; somebody had something that you 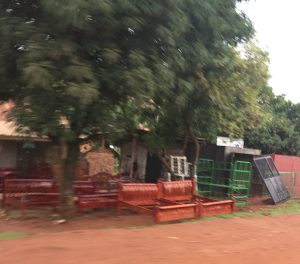 might want – that’s for sure.  And I was amazed that even though there is a LOT of poverty, numerous buildings were making and selling beautiful doors, iron gates, playground equipment, and beds.  And on our way back South I got to go to one of the open-air markets – hundreds of people crammed in a small space – buying and selling anything you can imagine.  They are clearly trying to scratch their way out of the economic conditions there.

Hard work is one of the things I saw all over.  People took pride in what they did.  It definitely reminded me of Colossians 3:23 – “Whatever you do, do it enthusiastically, as something done for the Lord and not for men.”

On the way North (where we were to serve most of the time), we stopped at a gas station for a “short call” (that’s what they call it).  Everywhere we looked – there were little wings all over the ground.  A lady was doing her best to sweep them away, but we found out that they had just had a swarming of something like termites – they called them white ants.  They swarmed and then lost their wings.  I’ll get to that in a moment. 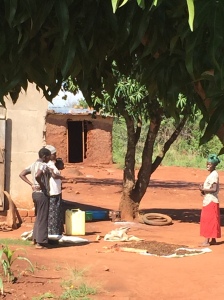 A little while later we had a blowout – one on the way up – one on the way back.  On the way back South – later that week – our driver was apparently going a “tad” fast.  What we didn’t know was that a police vehicle had pulled behind us and was going to pull us over.  What we did know was that we heard a “LOUD” bang – the bus rocked from the blowout – and police sirens began to wail.  We thought we were being shot at – but thankfully, we weren’t.

Well, on the way up we also had a blowout in the middle of nowhere.  We pulled over in front of the only little buildings that we could see, so that our driver could make sure we could make it to the next town.  Outside of the little building stood a family.  One lady was shaking something on a blanket – then cooking it.  When we investigated, we discovered that they had collected a bunch of the white ants.  She was threshing them (to get all the wings off), then cooking them.

I’m a little adventurous, but, no, I didn’t try them.  I’ve heard that they are a good source of protein, though.

For this Bible-preacher, one of the neatest things was getting to cross the Nile River (twice on the way up, twice on the way back).  The first crossing was over a bridge; we were warned that because of the turmoil in 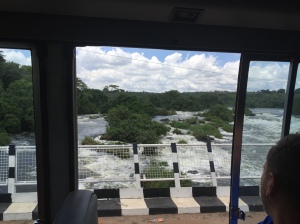 surrounding countries, the police are very protective of things like bridges – so you are not supposed to take pictures (some people might be scoping things out).  Somehow I did get a picture of the powerful river though.

At any rate, because there are checkpoints around the bridge – along with things like speedbumps to keep you going slow – it is common knowledge that drivers go slow on the Nile 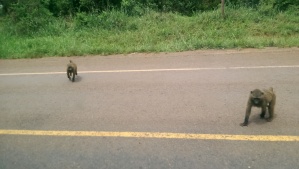 Bridge.  In fact, the knowledge is so common that the local baboons plan their day around it.  They stake out areas and wait for people to drive by – then they panhandle.  They come up – stretch out their hands – and want a little food.  (And I thought the seagulls around here were bad.)

The second time we crossed was by ferry.  Unfortunately, on the way up we just missed the ferry and settled in for a little wait.  I’m a man of faith, but I was put in my place – when I stuck my toe into the Nile, it didn’t part.  I guess I’m not Moses. 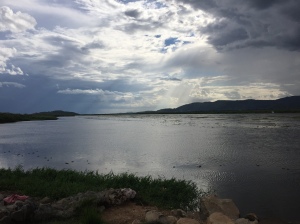 As we waited, we could see a massive group of storm clouds coming – uh, oh.

We ended up waiting a few hours because the ferry wouldn’t cross during a storm.  Since there weren’t many options to seek shelter, some of us hunkered down as best we could with many others – trying to stay out of the driving rain.  The Ugandan people had a lot of fun watching us try to stay dry.

We thought we might be in trouble when the storm wouldn’t end and night was drawing closer – the ferry also doesn’t run at night.  But thankfully, the rain ceased, and we crossed.

On our return trip on the ferry, we faced much more scrutiny by the police – they seemed to be everywhere.  They had their automatic weapons – and their military fatigues – and they were checking us all.  We discovered that they had such a large presence because they were protecting someone who was the equivalent to a Colonel.  Whew!  I thought the TSA might have called them. 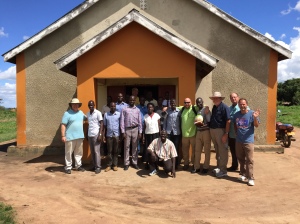 As for a taste of what I’ll finally be talking about in my next post – on the way back South (when I would be flying home), we were blessed to be able to stop in a little place called Pabo.  I was especially blessed because we stopped at a little church building where I was given the opportunity to preach.

The leaders had called together a group of members and fellow pastors to welcome us and worship with us.  It was truly special – no stained glass – no fancy instruments – a sound system on its last leg – but the Holy Spirit moved.  And I was moved.

Compared to where many Christians meet to worship in Uganda – this place was elaborate.  But in the church gathering-places we were able to see – all of them demonstrated a deep love, devotion, and dedication to God.  It was a reminder about what it truly important and where our focus should actually be.

Just seeing the kindness, hard-working nature, and generosity of the people on the travels to and from the mission center was enough to pierce my heart.  So many people are hungry to know the truth, but the laborers are few.  What’s your excuse?